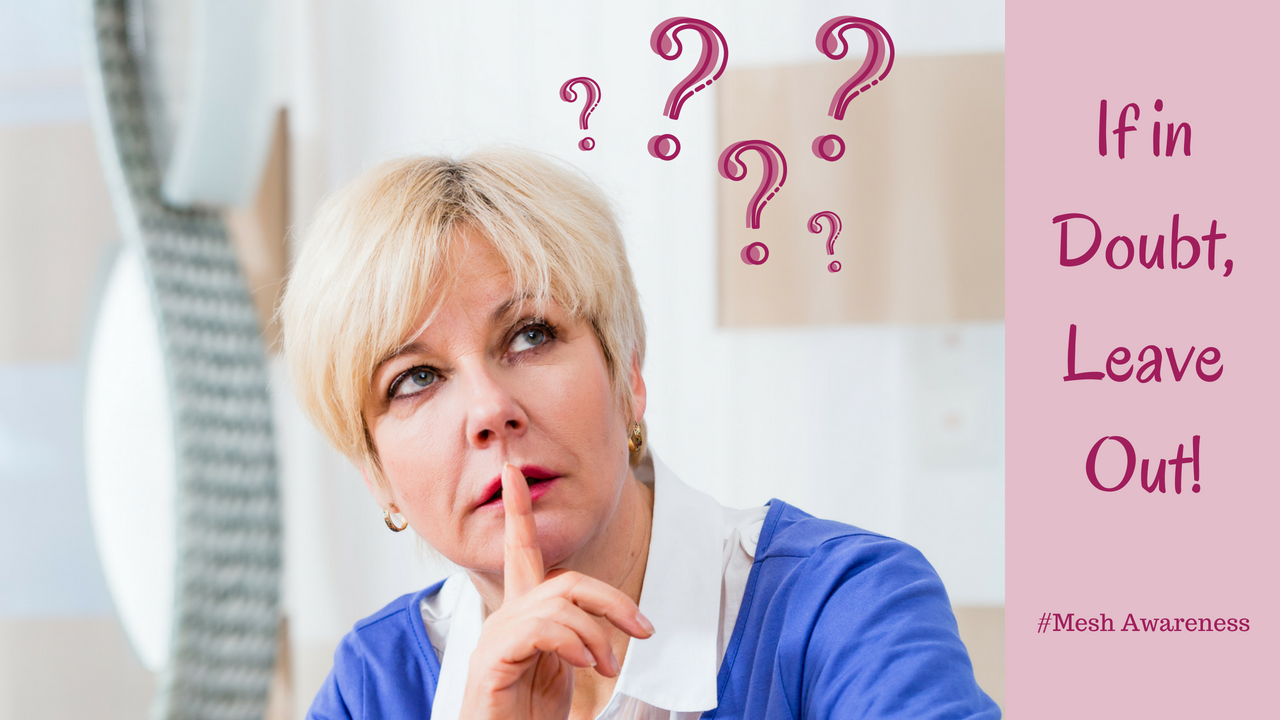 You know that feeling when you wake up from a horrible nightmare and realise that life is normal again – as normal as it gets anyway? It takes a minute or two to adjust to the fact that the awful scenario you’ve just been living wasn’t real and, as you fully wake up and sit on the edge of your bed you can breathe a sigh of relief.

But, just imagine if you were stuck in the nightmare, and you were trying to be heard but no-one was listening and that nightmare just kept repeating.

Sadly, that’s the very real plight of thousands of women who are suffering daily and enduring pain that no-one  should ever have to experience – all because of the ongoing implementation of transvaginal mesh device surgery.

Recently I’ve become aware of the tragedy of mesh implants during these ‘repair’ operations and I have to say that this issue has deeply touched my heart. I can’t imagine how cruel it is to trust a surgeon operating on you, only to find that the product used is now causing immense pain, destroying lifestyles and irreversible physical damage.

To one in eight women who undergo the surgery.

Those odds are horrific!

Honestly, it’s hit me like a ton of bricks! I first became aware of mesh surgery failures a short while ago and sat reading with tears, and sending virtual hugs, the stories of women who have been permanently maimed through a 20 minute surgery using sling mesh to improve their bladder control. The plastic mesh is dangerous and in many cases has resulted in the mesh cutting through other areas and causing severe damage and it’s virtually impossible to get the mesh removed as it connects itself to the tissue and organs surrounding it. Some women even report their partners complaining of damage to them during sex as the mesh has penetrated the vaginal wall.

It’s quite unbelievable, let alone unacceptable, that this product is still being used and promoted. It’s also being used in hernia surgery and many men are suffering the same pain and discomfort as the plastic damages their internal organs.

I think why this mesh issue hits me so hard is that I considered having surgery to fix my bladder control issue and came so close to picking up the phone and booking that appointment, after hearing from a physio at the hospital that urinary incontinence was likely to be an ongoing condition, and will probably get worse as I age.

The fact is that I’d had a gutful of hospitals, needles, tests, medications and everything else medical industry related by that stage and wanted to run as far away from it all as I could! So, I did. Experiencing bladder control issues was just part and parcel of hemiplegic migraines, so I decided to just live with it until I was strong enough to put everything I knew aside and start to research my health for myself. I told no-one what I was going through and decided to become my own health manager, gave myself that title, as well as my own project manager.

Thank God, I didn’t go through with that phone call to book an appointment and start the ball rolling towards an operation. It seemed a relatively straightforward ‘fix’ and I’d had enough of my bladder playing up. I will be forever grateful for that decision when I put the phone back down and decided to try to figure out my own body and learn how to get well naturally. After all, God created bodies that work organically (whole foods, clean water) and, surely as a project researcher, I could figure out what the heck was going on.

I’m so grateful to say that now I’m OK – actually I’m better than OK, because I did a lot of research and figured out how to get well naturally with a healthy well-rounded choice of food and a lot of fasting and prayer.

Sadly, that doesn’t help those women who have already been injured though, and I feel sick at the thought of what other women are going through – all through no fault of their own. In some cases the sling was used without the woman’s permission or knowledge.

I remember sitting right where I am now and experiencing that awful lack of control situation, it was about the same time I dropped a whole bowlful of hot rice while taking it out of the oven and my left arm just gave way (hemiplegic migraines will do that to you!). If ever I was tempted to do something it was that day. Thankfully I didn’t have enough willpower or courage to follow through with that phone call and it’s one phone call I am so very grateful that I didn’t make.

If you’re considering having surgery to correct your bladder control issue, then can I suggest that you exhaust all avenues before going down that track – eg look at your diet, go and learn how to practise Dry Swan exercise trust your own instincts and learn how to listen to your bladder, because it’s sending signals to you and you can learn how to hear them.

Once you master that – you can then learn how to listen to your whole body and address issues before they become a problem.

Just know this – that I’m praying for you if you have suffered damage from corrective bladder surgery. It may not seem like much, but when you know me you know that I charge full-on into that throne room of Grace and I expect my prayers to be answered.

Maybe it’s getting older, or going through the many trials and tribulations that have dotted my life, but I absolutely believe in the power of prayer and am praying for the truth to be revealed, for every woman who has been injured to be compensated (although it won’t make up for the damage done) and if you’re one of those women considering surgery as an option to improve bladder control, then I pray you question the research and be courageous enough to stop and assess the options for yourself. Become your own health manager and decide what’s best for you, based on your own research, because there’s a wealth of reliable, factual information available. Then make up your own mind who you will include in your personal health management team and what, if any procedures, you may choose.

As well as that, research your diet (best time spent ever!), make sure you’re drinking filtered water and hydrating properly and identify all the synthetic products you are consuming – because we were never made to digest, process or use synthetic man/made products in our bodies.

A favourite old saying comes to me that I learnt in my early office days – if in doubt, leave out!

Laugh And The Whole World Laughs With You.